by mike December 26, 2012
General 0
OK as many of you know this blog allows me the opportunity to try out some really cool dog equipment and recently I have started choosing you my reader to test the products so that we truly get an unbiased opinion. The product we are testing today is Sentry’s Calming Collar! The dog chosen was Dexter, owned by Melissa… Here was what she said about Dexter before using the collar: 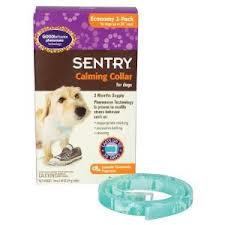 Dexter is afraid of gunfire and fireworks. We live in the country, next to a fireworks show designer, and hunting season does not limit the gun play.
Melissa has had the collar for over a week now ( we got a late start on this test) but apparently it was plenty of time for the collar to have results and I am going to share them with you, but I want to let you all know that for years I have used this type of treatments in dogs but always in an expensive spray or difuser… Sentry has really up the ante with this new product. It is a collar that is impregnated with pheromones and other types of aroma therapy, and the price is really reasonable!

Ok enough about me and back to Melissa and Dexter… Today I got an email progress report on Dexter and well I will let the words speak for themselves!
Before, hearing a gunshot would paralyze Dexter for hours. With the collar, we let him go to his “safety hideout” (under the side table), but he was up and out of it in an hour. He shook himself and went on with his day.
It seemed that, instead of worrying himself all day, he was more relaxed. He played a lot more with his buddy, didn’t lick himself as much, and was friendlier with new people in new environments.
He stopped acting like a grouchy old dog and was his four-year-old self again.
The collar is heavily scented. I’m guessing the scent benefits both human and dog, but the pheremone does not have a scent. The lavendar-chamomile scent did become weaker after the first day or two.
I can’t tell why I felt more relaxed, but it was either the aroma therapy or Dexter’s new, more relaxed demeanor.
Bishop, Dexter’s already easy-going canine pal, also seemed calmer, but he didn’t have far to go.
We had to go out of town and we left the dogs with a coworker. Dexter hadn’t met him or his dog before, but a home setting was preferable to the vet where’d they be alone all day because of the holiday. (Not all day, but I wanted them to be able to go out more than twice a day.). Dexter was eager to meet the new dog and immediately was comfortable with the people. The biggest conflict was who gets the lap instead of Dexter cowering in his crate, not eating.
We live out in the country and there isn’t much noise. There’s no traffic or people walking or jogging, no dogs being walked, etc. Previous experience staying with Dexter in a more urban setting was distressing. He wouldn’t eat, wouldn’t explore the new yard, and was too terrified to go to the bathroom. Staying in town this time with the collar was a different experience. He was nervous at first, but settled in more quickly and had no trouble expressing his bodily functions.
Dexter’s worst fear was gunfire and fireworks. As I said, we live in the country and gunfire is common. Our neighbors also design firework shows. We started this trial a few days after the tragedy in Newtown. There was no gunfire for a few days, probably out of respect for the tragedy, but hunting season is still open, so we did get to see his reaction with the collar.
Before, he’d hear the guns and would, if we were outside, would either bolt for the door or climb the fence to get to me. We have a six foot chain link fence, so obviously that is an unsafe thing for a seven pound dog. This time, while he was anxious to go in the house, it wasn’t as frantic as before. Inside he would wedge himself under furniture or into a corner. He still went into his corner, but instead of spending the rest of the day there, he was out within an hour, ate his dinner, and was willing to go back outside to do his business.
Dexter has just recently taken to attacking Bishop over territory or when people came to the house. I had been able to prevent this from happening when I could see Dexter putting his ridge up, but not all the time. Dexter doesn’t really bite, or bite much, but Bishop’s reaction shows his fear and confusion. With the collar, Dexter was more tolerant of him being in Dexter’s “space”, they were able eat treats near each other, and happily shared the sunbeam in the living room together.
Again, the collar is strongly scented, but it fades quickly. There is also a powder on the collar that activates the pheremone as it flakes off. I recommend taking the collar outside and shaking it, maybe stretch it a little, to remove the powder. After that, it shouldn’t be a problem.
It’s only been a week and the literature says it can take up to two before you see the full benefits, but I can say that I will be using this collar when I foresee stress for him: June and/or July (fireworks season), going out of town or to the vet, and hunting season in the fall. I would say this collar has definitely helped Dexter.
OK so Dexter’s Mom and this dog trainer both believe in this product! Will it be a miracle cure or magic pill… NO! Will there be some dogs it does not affect? YES! But in my opinion it works in enough dogs that it needs to be utilized by more folks… So go out to your local pet supply warehouse and get one, what do you have to loose?
Mike
2182 Total Views 2 Views Today
Share
180 / 778

When too much love becomes bad