by mike August 12, 2014
General 0
Good Behavior or Bad Behavior???
Well let me let you in on a little secret… While humans have very definite idea of what good and bad behavior is… Your dog has absolutely no idea! Yep I said and now I gotta explain it but once I do you will have a totally new way to think about all the things Fido does, both good and bad (at least from your perspective) and why!
How we get Fido to repeat or increase a Behavior… Reinforcement
So where do I start? Well with a pretty straightforward statement “Dogs never engage in a behavior that does not get them something” Simply put if your dog is engaging in a behavior that you do not like and deem “bad” it is only because you have inadvertently done something to reinforce that behavior…
Now for simplicity sake let’s define reinforcement…. It is anything that increases the frequency of a behavior (makes it happen more often) Now reinforcement can be either positive or negative and all that means is whether you are adding something to the scenario or taking away something…. But both can and will reinforce the behavior.
Next consider what it is your dog wants… Let’s look at a common issue…
·         Jumping up, the dog wants attention! Whether you love on said dog for giving you these hugs or yell and scream (or worse) what is the dog getting? Attention! Either way you go Fido got what he wanted and the behavior is reinforced! Both of these are positive reinforcement adding something to the scenario to increase the frequency to an event!
·         Look at it from Fido’s perspective there is not right or wrong there is simply did it work or not?
·         In reality whether it worked or not is really how we the human react to each behavior Fido offers! Sorry but it comes full circle and it is us my friends, not the dogs that are creating the problems…
o   If you are curious about the idea of negative reinforcement it comes down to taking away something negative to increase a behavior, and the idea of having to add something aversive to get my point across is an option I do not like therefore will not use, but for the sake of the explanation I include it… Just a choice I make.
So just what can we do to fix this
(or prevent it???)
The idea of Punishment….
Here is another very simple idea… Ignore the bad & Reward the good!
This brings us to other side of the training coin Punishment… Once again let’s start with the definition. Punishment is anything that decreases the frequency (how often if occurs) a behavior… Again we have two versions and again positive and negative…
·         Positive adds something to scenario to decrease a behavior like smacking the dog every time they jump up ( not an option I want to use)
·         Negative taking away something to decrease the behavior, such as leaving the room and ignoring the dog when he jumps. Much the same way we teach kids to ignore bullies so that they get no reaction thus extinguishing the bad behavior….
Again in the dog’s head it has nothing to do with good or bad rather again only having to do with whether t behavior works or not??? See we are so focused on good and bad that we have forgotten how to teach and reward behaviors which is the last topic I want to discuss….
Replacement Behaviors and Rewards
Finally let’s consider the idea that if we reward a behavior that we humans consider a “Good” behavior we can prevent Fido from ever learning a “Bad” behavior. We can even convince the dog to change what we think of as a bad behavior to a more rewarding good behavior!
Ok back to the jumping up behavior, we need a replacement behavior to reward that will physically not allow the dog to jump at the same time… For example a dog who is sitting cannot very well jump at the same time now can he. But let me be clear you must pick an actual behavior… Just saying I don’t want Fido to jump will not cut it (because there is no way to reward a behavior that does not exist) you must pick an actual replacement behavior …
So, we have basically taken the idea of Ignore the Bad & Reward the Good and modified it to Redirect the bad & Reward the Replacement behavior. Which done over time will make the sitting behavior more rewarding (working for the dog) and jumping up less rewarding (getting nothing for the dog)… What do you thin Fido is gonna pick to do?
We are now back full circle to the fact dogs have no clue what good or bad behavior is they simple understand the behaviors either get them or don’t get them what they want. If it gets them what they want they continue and if it don’t well they stop. We as humans must be smart enough to suggest wanted behaviors and reward them while ignoring and giving no acknowledgment at all to the ones we dislike….
Pretty simple when you get right down to it Hugh…..
Mike Deathe
Owner of KISS Dog Training
3881 Total Views 2 Views Today
Share
485 / 743 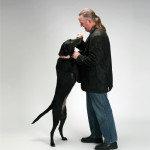 Our new book, Forever Home… Dog Training 101 & How to be a better shelter volunteer is done!!!!!