Now you have to decide which verbal cue or hand signal you will be using for “sit”. As with all of my training, I focus on hand signals first! Remember, DOGS DON’T SPEAK ENGLISH! I simply modified the luring movement of my hand with the treat, to become my hand signal for “sit”. Imagine taking a treat between your thumb and index finger, palm facing down, and then flip your hand palm up. My hand moves about 12 to 18 inches upward from waist level to nearly shoulder height. If you have been consistent with using the lure and clicker, the addition of the hand signal should be very quick. So, is my hand signal the only one you can use? No, I am simply explaining the hand signal that I use. There are many out there and none are any better than the other. But you need to make sure that each signal you use is distinctive and not at all similar. If they are too close in similarity, it could cause real confusion for the dog. Imagine if your hand signal for sit is pointing down with your index finger and your hand signal for down is pointing down with an open hand. Not very different are they? Once you determine the hand signal you are using, you should spend at least a day working with the lure (treat) and clicker and several days thereafter solidifying the hand signal. Within the week, the hand signal should be working at least 70-75% of the time if you are practicing in a non-distracting environment. It would be foolish to expect this to work at, let’s say, a dog park this early in the training. The topic of distraction will be covered in a future post as well as “The 3 D’s” of dog training.

Notice that at this point there is still no verbal command…no “sit”! This is intentional. I don’t want to add a second cue until Fido is proficient with the hand signal. I always start out with a hand signal first because body language and body position are the easiest forms of communication for dogs to learn. Remember, DOGS DON’T SPEAK ENGLISH! It is important here to understand that until the first cue (hand signal) is successful at least 80% of the time, trying to combine or add another cue is not advisable. Let’s assume though, that Fido is now at or above the magic 80% level and we are ready to name this behavior! Now it doesn’t matter what we call this behavior because DOGS DON’T SPEAK ENGLISH! I could call it “sit” or I could pay homage to one of my favorite musicians and call it “Margaritaville”. The word itself matters little to the dog; it is just easier on us to call it “sit”.

Continue to work with your dog, using treats, practicing both the hand signal and verbal command together until the dog reaches the 80% success mark. At that point, I recommend spending several weeks where you continue using treats, but practice the hand signal and verbal command separate from the other to make sure each is understood independently. When we can say Fido has each version of sit down pat, we will begin to do what is known as fading the reward. This idea will be covered in the next post; “Will I always have to use treats?”

New Class to Keep Kids and K9’s Safe and Happy

Want to tackle some issues yourself???? 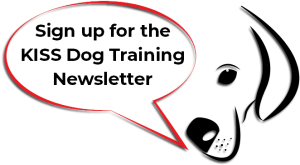